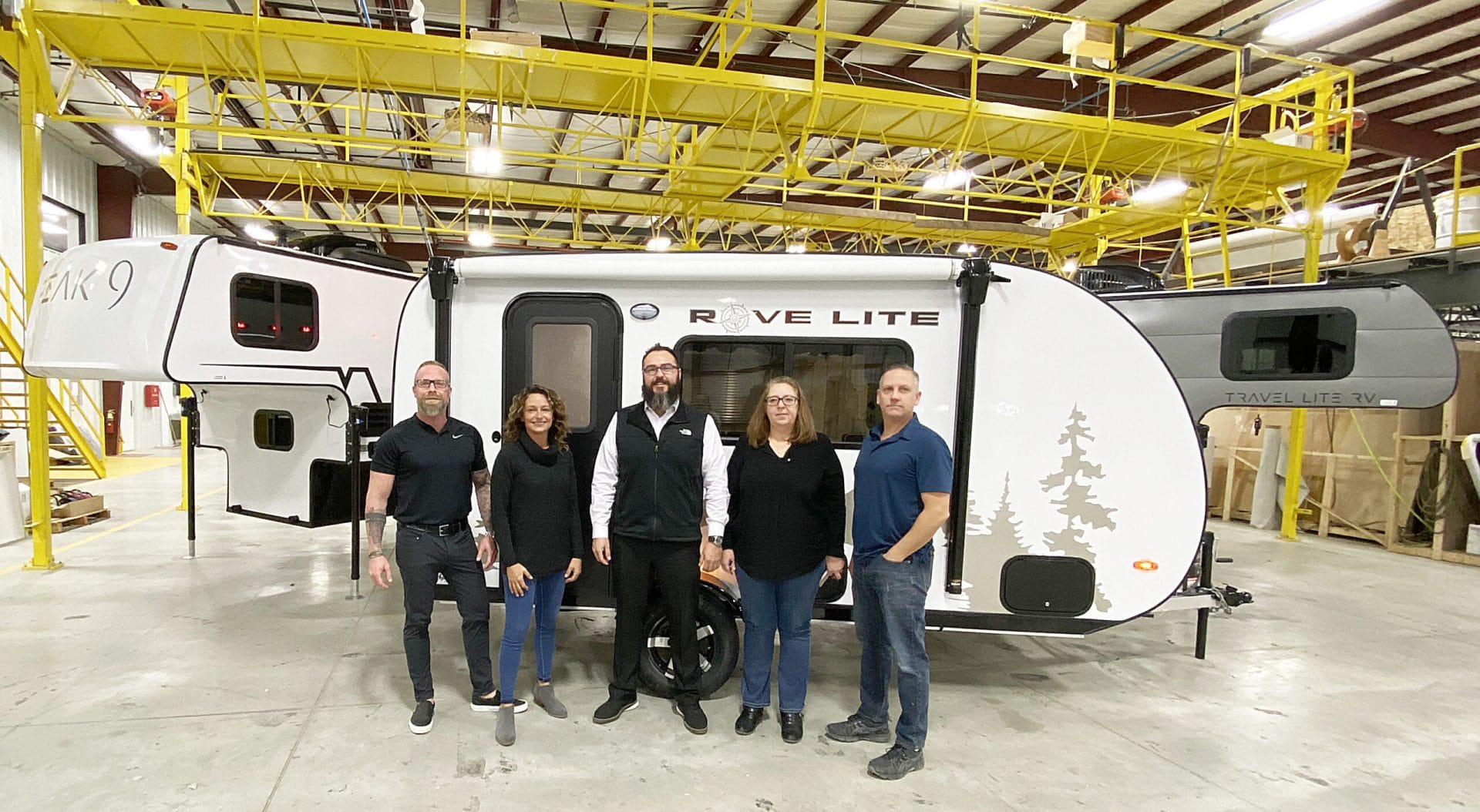 The Northern Indiana firm is also unveiling a revised management team led by Travel Lite COO and General Manager Ryan Rebar, who refers to the company’s recent transformation as “Travel Lite 2.0,” following a couple of years in which the company faced a global pandemic, a protracted shutdown and an internal leadership transition following the departure of its former president, Dustin Johns.

“Travel Lite has gone through – in the last couple of years – a lot of ups and downs,” Rebar told RVBusiness regarding recent changes at the company founded in 1989 in nearby New Paris, Ind., by Dustin Johns’ father, the late Larry Johns.

As part of a well-publicized expansion move from New Paris to Syracuse, Travel Lite in 2018 purchased land in a Syracuse industrial park and spent $5 million to construct four buildings housing a factory with two production lines, an RV repair shop, dealership and fiberglass shop.

By the summer of 2019, however, Johns and his board announced that the firm was undergoing a “restructuring” and all Travel Lite employees were laid off. In the process, Rebar – with nearly 20 years of experience at Thor Motor Coach and Forest River Inc. – was named COO in October of 2019.

Meanwhile, Johns, who had run the firm since 2015, ultimately left Travel Lite in May of this year and is no longer a part-owner of the company which is now held by a group of local investors.

Rebar today is open – but careful – in his comments about the realigned Travel Lite team’s commitment to re-establishing its place in the RV industry with lightweight products designed to serve a downsizing U.S. automotive marketplace.

“I didn’t want to come out of the chute saying, ‘Check out all this great stuff that we’re doing,’ when we left all these people hanging,” said Rebar. “So, today, we’ve caught up with most of our vendors and have taken care of most of the back warranty stuff. We’ve also taken care of a lot of the retail customers and have gotten a lot of the dealers cleaned up on promises that were made – just things that were never fulfilled.” He expressed gratitude and appreciation for the level of support the company received from vendors and partners throughout the restructuring.

Truck campers – the Ultra-Lite and Extended Stay series – will remain staples of the company. But, again, the focus on the travel trailer side of the business is changing to an extent as Travel Lite 2.0 focuses on smaller, easy-towing RV’s.

“I’m not going to build a 30-foot bunkhouse travel trailer that goes to a retail customer at $29,995 because Forest River’s doing it. Keystone’s doing it. Dutchmen’s doing it,” Rebar said. “I’m never going to be able to compete with those guys, so I’m staying in my lane.”

Toward that end, the company’s former Aura, Falcon and Evoke travel trailers have been phased out in favor of the diminutive Rove Lite.

Travel Lite has partnered with an auto and RV dealer in Colorado, Jeff Taylor, who operates HWY34 RV and Peak Kia in Windsor. Taylor told Rebar that by mandate in 2025, 10% of new car inventory has to be electric, a percentage that will likely grow in following years. This, Rebar said, opens up a large new market for small travel trailers.

“We’re going to go after the markets where maybe only a few people are playing,” said Rebar. “But we’re also looking at the future market and a new little product, the Rove Lite. If you’re driving a Prius, how are you going to go camping? How do you serve the guy who doesn’t have a big truck? I’ve just built a product that’s under 1,500 pounds. You can pull it with a Subaru. Heck, there’s even a Mini Cooper package you can pull it with.”

Rebar says the 16-foot Rove Lite, in turn, is more of a European-style build including a composite floor and aluminum chassis. The initial two floorplans will be under 1,500 pounds. Floorplan No. 3 will come in at 1,700 pounds and a small 12-volt-only model is planned that will weigh in at about 1,000 pounds.

The Rove features a no-substrate fiberglass sidewall with two-pound fire-retardant block foam insulation that’s impervious to heat, Rebar said. All of the interior panels are Azdel composite and the seamless, poured resin fiberglass roof is one piece from bumper to hitch.

Interior features, including a convertible bed and bath with a shower, offer space-saving functionality, says Rebar, adding that the initial response to the Rove has been decidedly positive.

“We signed a new dealer for truck campers in Oklahoma a week ago. We sent him the ad for this thing and the specs,” Rebar said. “His response was, ‘I’ll take 30 of them, right away.’”