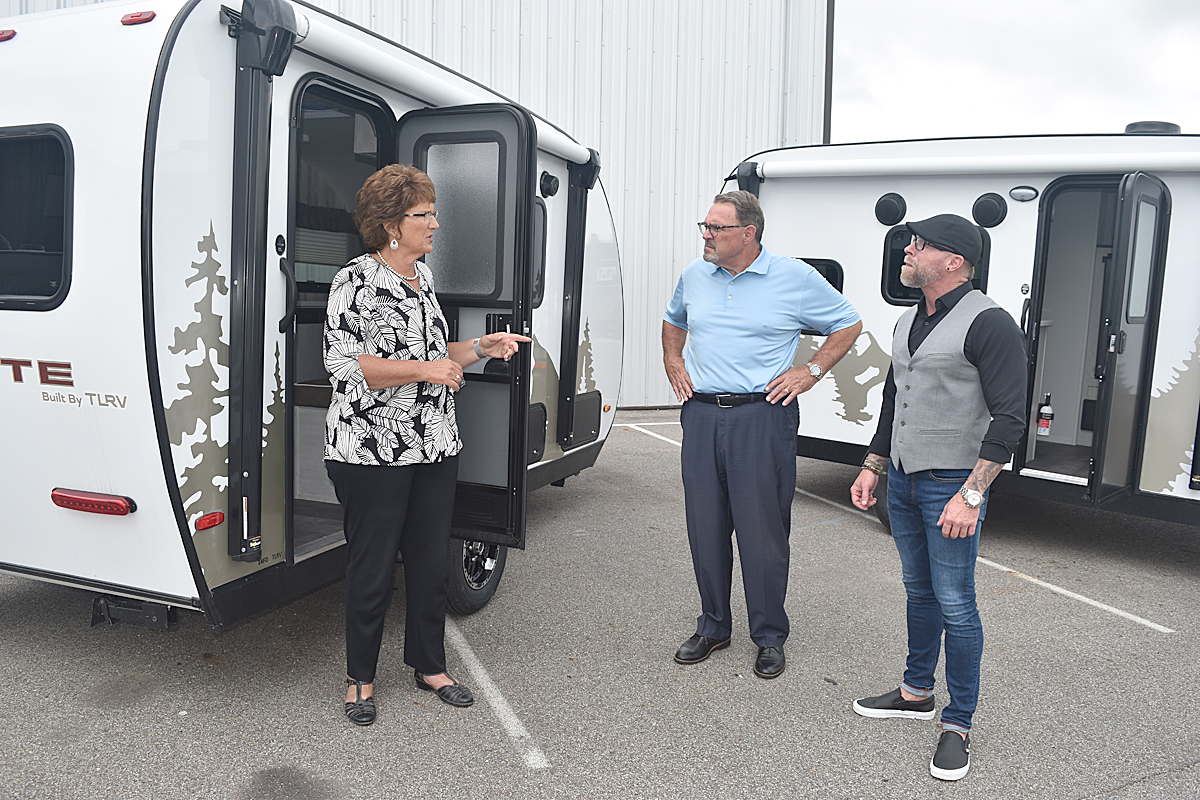 SYRACUSE, Ind. – A call to U.S. Rep. Jackie Walorski’s office helped Travel Lite RV navigate turbulent financial waters following the pandemic, and the interaction led the congresswoman to drop by the OEM Monday (Aug. 9) to have a look around.

“We were having a terrible time in February getting the Travel Lite PPP (Paycheck Protection funds) forgiven, because we, unfortunately, qualified for round two,” Bruce Korenstra told Walorski, a Republican representing Indiana’s 2nd Congressional District, during the visit. Korenstra, a Travel Lite investor and interim president of its board of directors, said the company reached out to several different government agencies before calling Walorski’s office.

“We could not get any answers. … One call. Two days later. PPP round two was funded. I don’t know what you did, or who you talked or how you did it, but it was greatly appreciated,” he told Walorski.

“I will tell you this,” Walorski said. “Our district is so heavy in manufacturing, because it was all deemed essential. I think Indiana ended up with $2.5 or $3 billion of PPP loans, so we had a hot line in. We had so many companies call in the same situation. We had, by that time, established who to call, how to get it done and how to line this thing up fast.”

As Travel Lite CEO and General Manager Ryan Rebar began to show Walorski around, he explained the truck camper and travel trailer manufacturer’s vision of producing smaller, lighter travel trailers that are easier to tow.

“We launched a new product at the beginning of this year,” he said. “You know, we are really hitting a smaller market with all these changes in electric vehicles and lighter-weight vehicles and fuel economy. We built an RV that you can pull with a Subaru.”

He told Walorski the Rove Lite travel trailer employs virtually all composite materials and has a base weight of just 1,500 pounds.

“We wanted to go after a market that didn’t really exist,” Rebar said.

He also told Walorski about the new Rove EV, an all-electric model, when, equipped with solar panels and lithium-ion batteries, will be able to remain off grid, autonomously, indefinitely.

“No propane. No fuel. None of that,” Rebar said.

“Wow, that’s amazing,” Walorski said, as she stepped inside a Rove Lite to have a look around. “What a great idea.”

Rebar plans to have the Rove Lite and the Rove EV on display at the Elkhart RV Open House during the week of Sept. 27.

Walorski said the shortage of workers is a least partially attributable to the current policy landscape of unemployment benefit extensions.

“When the Biden administration came and decided to continue to pay people to stay at home, in Indiana, the average wage to stay at home was $17.50 an hour,” she said. “Biden didn’t have to try and get a mandate (for a $15 an hour minimum wage.) They just basically went around the back of that and said, ‘OK, you don’t have to pay your people $15. We’ll pay your people $17.50 to stay home. You then, will pay at least $20 to get them off the couch.”

She said it was bad policy that negatively affected every small “mom-and-pop shop” in the country.

“It’s a snowball effect. … It hurts,” Rebar said. “Our vendors can’t get people. We can’t get our parts and pieces. It’s a struggle.”

Travel Lite currently has 63 employees and Rebar said he hopes to have 100 in the near future as order backlogs continue to grow. “I just want to get parts and pieces and put people to work,” he said.

View the full article featured in RV Business at: www.rvbusiness.com/u-s-rep-jackie-walorski-visits-travel-lite-rv-in-syracuse